K-9 Officer Michael Westcott, a lifelong resident of Southwick, has been employed with the Southwick Police Department since 2006 at which time he began his career as a Reserve Police officer before being appointed as a full-time police officer in 2009.

Before his journey as a police officer, Officer Westcott served the Town of Southwick with the Southwick Fire Department as a fire fighter/EMT for 11 years.

K-9 Officer Westcott’s partner, K-9 “General”, is a German Shepherd/Belgian Malinois mix. K-9 General who was named after Jack Jeneral, a citizen of the Town of Southwick to whom donated the funds to purchase K-9 General. K-9 General was born and spent the first year of his life in Holland before making his way to the states. From there, K-9 General’s journey landed him in Pennsylvania at the Shallow Creek Kennels where he was matched up with Officer Westcott.

K-9 Officer Westcott and K-9 General began their training in September of 2017. K-9 training takes approximately 8-12 weeks to complete. K-9 General is referred to as a Dual-Purpose K-9 which means he is trained in several different areas.

K-9 General was trained in obedience, evidence recovery, tracking, apprehension and handler protection and of course, narcotics detection. Training does not stop there; K-9 Officer Westcott and K-9 General will participate in minimum of 16 hours of maintenance training each and every month alongside other K-9 teams from all the surrounding cities and towns.

During their time here, Officer Brewer and K-9 “Thom” assisted with rescue efforts at Ground Zero after the 9/11 attacks.  K-9 “Thom” passed away in the fall of 2009.

Sgt. Thomas Krutka and K-9 “Jax” took over the role of the department K-9 Unit after the retirement of K-9 “Thom”. During their time together which went on for an amazing 10 years of service, Sgt. Krutka and K-9 “Jax’ had numerous successful accomplishments including a narcotics search that yielded over 1.2 Million dollars in cash. 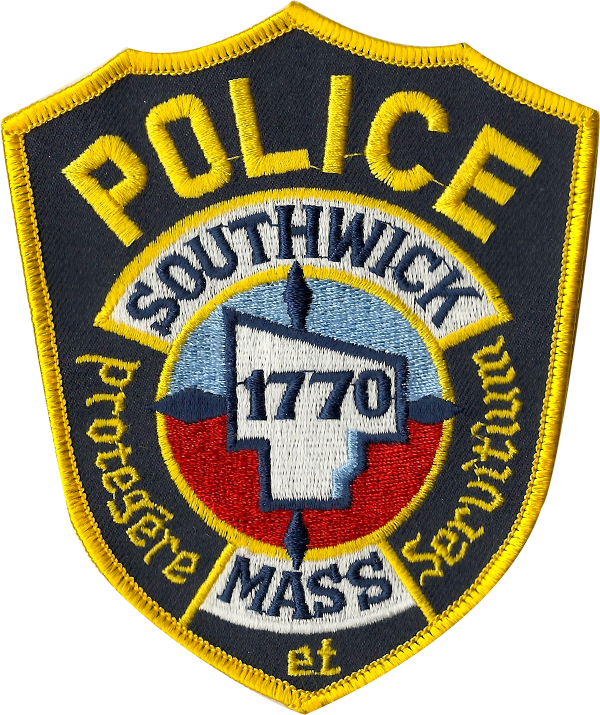 Message from the Chief

On behalf of the men and women of the Southwick Department, welcome to our website and thank you for taking the time to learn about our organization. I am honored to have the privilege of serving the community and as the Police Chief, I invite you to browse our website and familiarize yourself with the various dimensions of our department. My hope is that these pages provide useful and interesting information about the police department and the services we currently provide.

Last Day….Today, after 25 years of service, Res. Ofc. Bob Deluca is calling it wrap….Ofc. Bob Deluca began his service in law enforcement as a part-time Police Officer over 30 years ago working for the West Springfield Police Department as an Auxiliary Police Officer. Ofc. Deluca made it up the rank of Lieutenant for the Auxiliary force before transferring over to the Southwick Police Department. Ofc. Deluca has served the Town of Southwick as a Reserve Police Officer for many years filling patrol shifts, cell watch and transports, working boat patrols, was always available for storm coverage/road closures, the motocross, parades etc….Bob always made himself available with a smile. We wish Bob the very best and will miss him….Please join us in Congratulating Res. Ofc. Bob Deluca on a job well done!!! ... See MoreSee Less
View on Facebook
· Share

AMA Lucas Oil Pro-Motocross Championship National 2022….Yes, it is that time of year again. We are just under three weeks away from this years’ AMA Lucas Oil Pro-Motocross National sponsored by The Wick 338 held on the grounds of the American Legion Post 338 here in Southwick. This years’ National will be held on July 9, 2022 at the Wick 338 located on the grounds of the American Legion Post 338 on Powder Mill Road. The actual race is on Saturday July 9, 2022, however, there will be a considerable amount of activity in and around the motocross grounds the week prior to the Saturday event as race preparations are completed. On Friday, July 8, 2022 most of the professional motocross teams will arrive along with several amateur teams as well. Traffic will be a bit congested from time to time, however, police officers will monitor the area and will assist when needed. The AMA Lucas Oil Pro-Motocross National has the potential of attracting thousands of spectators on the day of the event; on Saturday, July 9, 2022, heavy traffic should be anticipated. Several streets will be re-routed as one-way streets. Signs and several police officers will be on hand to assist and or direct traffic. Chief of Police Robert Landis has overseen this event for many years and he and the senior staff, along with race promoters have devised the best possible plan of action to get spectators in and out as quickly and as safely as possible, however, it is imperative all who attend obey all traffic signs/directions and police officers in order for this plan to work effectively. SPECTATORS: If you plan to attend the 2022 Motocross National here in Southwick, PLEASE, follow and or obey ALL traffic signs and police officers. They will direct you to the closest parking area. Again, heavy traffic should be anticipated so make sure to allow yourself plenty of time to reach your destination and parking areas.Also, please keep in mind that not all residents here in Southwick may be a fan of motocross events like this one and will be inconvenienced due to this event, PLEASE be respectful to them and their property…Thank you! Residents: Please be mindful of the anticipated heavy traffic and extra activity in and around the Powder Mill Road, College Highway and Feeding Hills Road areas. Gas stations, restaurants and convenient stores will most likely see extra activity as well due to this event. If you are not attending and or participating in this event, this area should be avoided if feasible. The Southwick Police and Fire Departments are well prepared for this event. On the day of the event, the Southwick Police Department will have numerous police officers from our department in and around the motocross grounds as well as officers from neighboring cities and towns. The Southwick Fire Department will have staff in place as well for any emergencies that may arise. It should be noted, both the Southwick Police and Fire Departments will maintain regularly scheduled staffing for normal everyday business and emergencies. Please join us in welcoming the AMA Lucas Oil Pro-Motocross and all of the Professional Motocross teams from all over our great country to Southwick Massachusetts. We hope all of you have a wonderful and safe time… ... See MoreSee Less
View on Facebook
· Share

Please join us in congratulating both Katie Turcotte and Brennen Vinesett as this year's recipients of the Southwick Police Association Scholarship(s). Katie and Brennen have shown excellence in both in and out of the classroom and have excelled in every aspect of their time here at Southwick Tolland Granville Regional High School. In addition to her studies, Katie has been a Competitive Figure Skater since she was just a little girl. She has competed and performed in numerous competitions and shows over the years. We hope to see her some day competing in the Winter Olympics. Brennen Vinesett also received Southwick Police Association's, very first "Above and Beyond" award for exhibiting extraordinary care and passion towards a fellow classmate enrolled in the school district's Pathways program. Brennen friended this individual and looked out for him ever since the third grade when the two were just small boys. If the world had more people like Brennen, it would be a much better place for all of us!Congratulations to both Katie and Brennen and we wish them nothing but the very best as they begin the next chapter of their lives...Good Luck in college and make Southwick proud!! Class of 2022! ... See MoreSee Less
View on Facebook
· Share

On Wednesday we had a surprise visit from the “Girls on the Run” group, who dropped off homemade cookies and thank you cards for all the members of the Southwick Police Department!What a great surprise it was for all of us here at the police department and now, it is all of us that would like to thank the girls for their generosity and appreciation, thank you all very much!!! ... See MoreSee Less
View on Facebook
· Share